Our final product what we have created last week was a prototype of an apron.
The apron was made out of newspaper, as it was a first try for most of us. We
Worked in pairs, and had to do create the apron together.

Summary:
Our final product was the apron made out of newspaper.

Pattern
The pattern is clearly the apron we used for the tracing of lines. It is the pattern because we use it to copy aprons, and with it we could copy unlimited aprons, that is why it’s a pattern.

For the design I think I want to maintain most of the design, because it is the right size for me, isn’t too big, and isn’t too small. Everything else seems to be al right, and there aren’t any problems with the design of the apron. The only thing I want to change from the design is to add 2 pockets in front, which would be useful for placing small stuff inside them. Like pencils, scissors, erasers, things similar to that. Beside that there are no other changes I want to make on the design. I would put the pockets in front at the bottom part. I would place it hear, so that people could easily get their stuff, and have no difficulty putting things out of it. Before we started everything we made a sketch where in we used markers. The sketch helped us to know what we should cut.

The materials we used to create our apron prototype, was basically only newspaper. We used a lot of it. It had to be at least 110 cm long, so that it would be big enough to create an apron on its actual size. We also folded it into two making it shorter for the width, so that we could only cut it from one side, and end up having two. We basically used newspaper, because its something that would be easy to fold, stick things on, cutting, and would be the perfect material for training. Though it might break easily. It has a lot of things, which makes this material ideal for training.

During the process we used a variety of equipment. We used scissors, rulers, markers glue sticks, tape, and our own hands to make the apron. All of them gave us advances through the process. Such as that scissors helped us cut things, glue sticks and tape helped us stick things. We used rulers for measuring, and tracing straight lines. Though we weren’t actually allowed to use tape, and our hands which isn’t really an equipment, was used to fold, and use all other pieces of equipment, and markers for tracing. I think the only thing we need next time is something that would help us more accurately measure the apron, since we had some difficulties to measure certain parts with the ruler, and that we measured very sloppy with the ruler, making the measurements most of the time inaccurate.

The process made by the teacher seemed very logical, and was easy to follow. However there are some things I do want to do different next time, as in the technique. Such as measuring the sides of the apron, and the apron itself. I want to change the way I would measure next time because the way we currently used to measure, made the measurements inaccurate, and sloppy. Next time I want to use another way to measure my apron, and everything included with it. Also I want to cut more carefully next time, since I made several mistakes while cutting. The thing that matters the most is the folding. Since whenever I folded at the side a part of the newspaper would break. Next time I want to find a more neater and better way of folding the sides. Beside that there are no other things I seem that I have done wrong. Only that next time we should listen more carefully to the instructions, because we had to replace all our stick parts with glue, ending into a big mess.


TIPS AND TRICKS
If we hold the newspaper
Scissors are better for cutting then cutters
Glue is better to stick the straps with.
Glue might end up into a "sticky situation."
Rulers help you to cut straight.
Don't always use reelers or measuring tapes for measuring everything.
Though  they might be good for measuring.
Be careful measuring the curved parts of the apron. 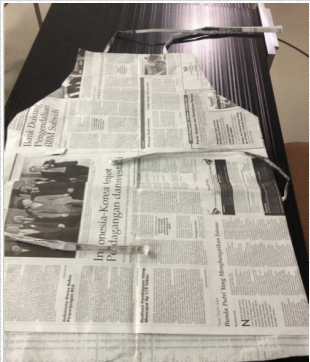