What I did in Music class connecting with Indonesia

In Music we learn about Indonesias traditional Instruments. We learn how to use them and how they look like. We also did a test if it was an Indonesian traditional instrument or not. We also researched about where they come from and when we play it. This page tells you all about traditional music instruments!
Enjoy!

Below you can see the top 10 traditional music instruments that are played in Inodnesia.

The Kecer is an instrument played with two pairs of cymbals. The first pair is too mount the rack the second is too strike the mount pair from above. It is similair to a Gangsa and it's a percussive instrument. 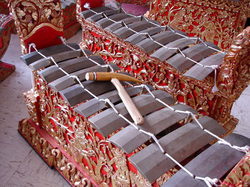 The Gangsa is a indonesian style of xylophone. Made out of metal bars, for the notes. It is just like a saron of Java. It is played with a hammer to hi 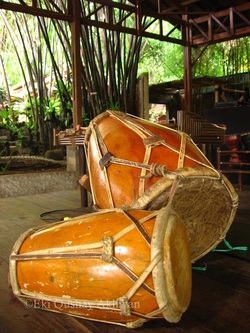 A Kendang is a double headed drum and has the rhythm like a gamelan. They could be played with sticks or hands. They are basically made out of wood for the drums body and buffalo skin for the place where you hit with your stick or hand. They are available in four sizes the ketipung, batang, ciblon, and the ageng.

Found in parts of Sumatra. A kulintang is an instrument played like a xylophone drum. It is a drum since you hit drums made out of metal, and a xylophone since all notes lei in next to each other. It is sometimes played in groups to make the sound more better. 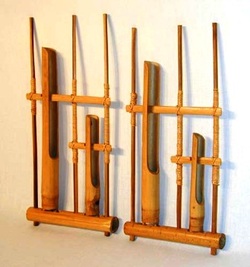 Angklung comes from Java. It is an I=instrument made out of bamboo and can only play one not as a single angklung. You mostly need to play it in group since every angklung has a different note. It sounds beautiful when you hear it and needsgreat teamwork to be played