"Life is not about the grades, its about the fun you have in doing drama." 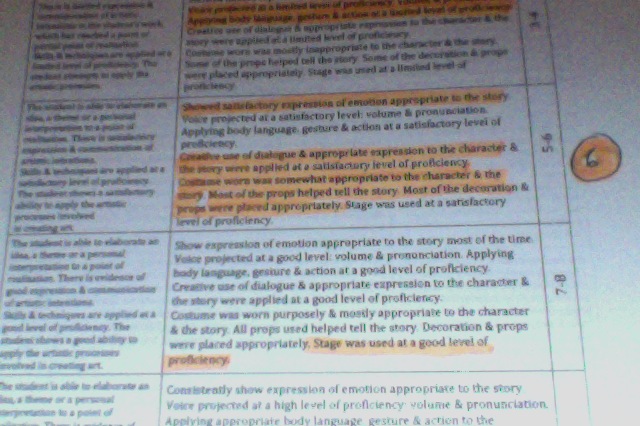 Drama Score for the act "A Dolls Life."
Reflection
For drama this quarter we learned about characterization. We learned how to act well, and how to characterize into specific characters. We started by learning about doing relaxation practices, that helped us to get into character, and ended with acting out a performance. We had to act out as the character we were chose, which we thought was suitable to our own character. We acted out the play “A Dolls Life.” In where I acted out as the easily angered lion. I faced no difficulty in memorizing the script, and understanding the play. The only problem that I faced was to get into character. This was because I was often to nervous, and to shy. However this quickly changed when the teacher told me to relax, and enjoy life, after a few moments of thinking. I was able to overcome my problems and get a boost of confidence. This helped me to perform well, after the performance. The teacher said that the performance was overall good, but that I was sometimes to quite, and that I moved my hands to often. I think what I can do next time to overcome this problem is to just remain calm, have confidence, and enjoy what I do. I would gain confidence by acting out the script often, so that I get used to it, and become less shy. Since shyness was the reason why I had a quite voice, and moved my hands randomly.

Global Context
The global context that I have chosen this quarter in life would be Globalization and Sustainability. I have chosen this global context because we learned about characterization. Which is basically about how we should act like in life, and how to act like different characters, relating to life itself. We learned that we actually act everyday as ourselves, and that acting and drama itself is very related to life. It is this global context mainly because we learn how more on how to act, and how to communicate better with the rest of the world with the lessons we learned in characterization.