Math is all about numbers and the most common subject. We have it 6 times a week, on Monday, Tuesday, Thursday, and Friday. We learn about fractions, decimals, ways of math, patterns and so much more! It's sometimes hard and sometimes easy or sometimes the middle of it. But one thing for sure is that when we come out of math class our brains are full of calculations! And our eyes only see numbers. But I like math.

One of my works: Math Test 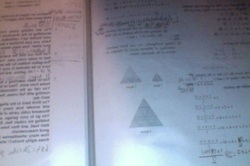 My math test was not as good as it seems. My score was 3 from the seven or even a 2! I was not happy and not satisfied at all. The hardest part was the pattern solving of the bunny army. It was so hard most people got a bad score. But I am still not happy. I then learned a lesson to practice more. So from now whenever a test appears I would practice it from a week before that. However the bunny problem, I almost understood the problem but it was just at the end of the last session of the test. Result of test 1= 3
Result of test 2 bunny problem= 2, 2.

The picture of the triangle is sort of how it looked like in the bunny problem army.

My Goals and Future Improvements.

I have achieved goal no 1 and 2, but 3 not. I want to investigate the skills quicker so I understand math batter. I can do that to practice. I mostly come to practice math skills at IXL.com where the world of math comes. Goal 2 is mostly achieved but I maybe shall make them a goal for quarter 2 too. So that I understand them even better. For the next quarter I also want to improve studying skills. Like for example for my math test that I study a week before that. I would like to do this so I would get better scores and qualify in math.